Therapy Session of ~Beth D.
It's been quite awhile since I've written about a culture shock. I have recently thought of a couple things that are different here in Mississippi than California as we just got back from a recent trip.
I've been subbing here in Mississippi.  It feels great to be back in a classroom. I subbed for a couple years in my home town and even at my high school alma mater. 2 very different experiences!
This is a picture of where I have been subbing. A shelf has even been made for their backpacks! I was amazed at the trust the kids displayed as they placed their backpacks down.
Nope to the double nope in California! I had my bag stollen twice in elementary school. By the time I got to jr. high, my backpack never left my side!
I love the ease of trust and general lack of not thinking the worst as we raise our boys in Mississippi! 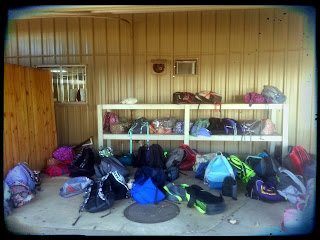 5 minutes from touchdown at the Oakland, California airport, I decided I missed Mississippi.

The flight was mostly peaceful with a little bit of turbulence. With about 2 hours left,  someone behind me decided to put on headphones yet turn their device up so loud I could hear it anyway. This person was 3 rows behind me. This person was obviously from Oakland.

I started thinking about the noise and traffic that California is known for.  I stated thinking that my blood pressure and anxiety were about to go up.

It has been amazing to be "home" for the holidays.  My heart is definitely torn in two. I left my heart in San Fransisco, but it found a home in Mississippi.

Realizing the different memories my boys will have of their first few years.

Nick:
☆didn't know what rain was until he was 4.
☆loves the sound of car motors zooming passed him.
☆has a hard time living without a pool near by.
☆didn't really know guns can have a good purpose, (hunting, protection.)

Andrew
♡ doesn't know what a sidewalk is at 3.
♡can't sleep unless it is pretty quiet.
♡doesn't even know what a pool is.
♡can't wait to be old enough to shoot a gun.

Trying to raise them to love and respect each other despite such different backgrounds. At least they have the same crazy parents! They have that going for them!

My husband was told he needed to go back to elementary school! He didn't know the names of local heroes.  He didn't know a lot of details about the Civil War. He wasn't clear on dates and locations of history in the gulf.

But ask him anything about the California Gold Rush. Ask him about the San Andreas fault. 1906? Big earthquake. The Oregon Trail.  Lewis and Clark. Ansel Adams. John Muir. Sacagawea.

It's interesting to find out that kids in Mississippi and Louisiana don't spend time in school learning about California history.  Seems like a "shoulda known," but we just never thought about it!

I want to make sure my sons learn about California history AND Mississippi history!

I lived in Atlanta for awhile.  Most of the street names were Peachtree, ending in way, street, court, lane, avenue, boulevard,  and any other form or synonym for street. I lived on Mead Street, though.

My home town of Antioch has street names such as G Street, 18th Street, and everything in between.  A lot of Spanish names too or streets named after trees.  I grew up on Springwood Way around Dogwood Way and Mahogany Way.

McComb is easy.  There is the part of town with the state named streets. There are a lot of lanes named after who's farm used to be at the end if it. And some streets named for what they are: Street street. Broadway. Magnolia/Pisgah Road.  Homesville Road, because it takes you to... Homesville. Easy. I lived on W.A. Walker Rd, named for the man who probably carved a dirt road into the land many, many years ago. He owned a diary farm and most likely had slaves.

I like learning the history of a place.  Here in the south, history matters; history shapes the family ties that we see today. History is relevant,  much like the biblical/world history I have been learning.

Therapy Session of ~Beth D.
I'm opening up shop! I'm so excited to be sewing and offering homemade gifts!
Check out my fb page and hit "Like!" I need 30 likes to be able to turn on fb features for tracking my business and such.
JUST BETH JUST BECAUSE
Here is a picture of a few things in my shop.  Thanks for looking! 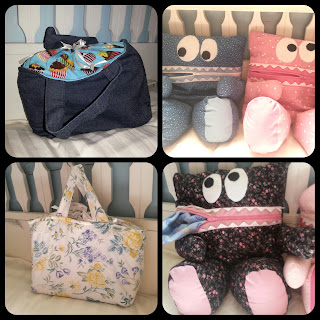 Things I'm looking forward to when I get home:

Have I done this one?

Tall brick buildings. Many of them. Even around each other.  Apartment buildings. Old shops. Two story homes. Brick everywhere in Mississippi.

I'm not sure when brick was stopped being used so frequently and plentiful. I know a few brick buildings in the downtown area where I grew up were not fit to enter until they were retro-fitted for earthquakes. There simply are not as many buildings made of brick in California.

I guess the big bad wolf can knock most of California down!

3rd Friday of the Month

What I Did Yesterday